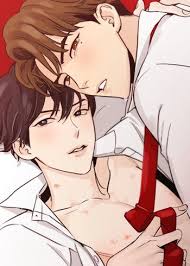 Seung-chan is stressed. He has enough on his plate with the long hours at work, and now he can’t even get any rest at home! Every night, the lustful moaning and violent banging from the apartment upstairs keeps him awake. Just as he’s at his wits’ end, he chances upon the gorgeous, enigmatic Hyesung outside his building. Surely all those filthy sounds couldn’t be coming from such a pretty mouth? But as Seung-chan soon finds out, there’s a lot more to Hyesung(from lezhin)