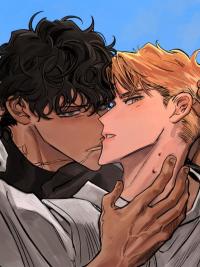 Ken’s life is ordinary. He’s a former orphan, he works as a server in a pub, and he lives on the outskirts of Aman, a religious nation free from the influence of vampires. Then one day, Ken is bitten and cursed by a vampire, and is only saved from certain death by Agia Frederick, a powerful disciple of the Church. However, freeing Ken from his curse requires a physical intimacy with Agia, who seems to have ulterior motives for keeping Ken around… Will the relationship between the two men bloom into something more? Or will it be crushed and burned entirely?