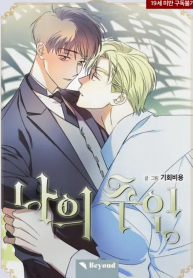 Richt and the owner grew up together since childhood as the son of a prince and a gardener. The owner has had a crush on Licht for a long time, but he knows that the royal family and Alpine Richt will marry Omega and inherit the throne, so he cannot connect with himself as a beta and commoner. In the end, he leaves behind Richet’s request, who wants him to stay by his side for the rest of his life in a relationship like his own brother. – Three years later, the owner returns to the castle without completely breaking his heart for Richet, this time with the butler. As a prince, he reunites with Richt. Richt never found the owner who left the castle. The owner expected that he would not be able to return to the same relationship as before, but rather, with Richet’s unknown attitude, the owner becomes more and more entangled with him… Childhood Friend *Work Keywords: Cold-blooded, obsessed, sullen, indifferent, regretful, younger, sweet, single, wounded, unrequited love Serialized Jinji BL Korea BL