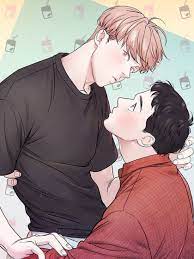 What are we going to do next? ‘Dajeonggong ♥ Innocent Jinsoo’ Youth Comic BL! A teenage childhood friend and a stranger kiss by chance! However… My childhood friend’s first love is me? Hyo-bin Jung, who is often the difference between her girlfriend, and Woo-chan Woo, a ten-year-old friend who always comforted Hyo-bin by her side, however, when she sees Ki-chan Woo, a friend who always thought she would be innocent, kissing a man, the relationship between the two changes 180 degrees. ?! ‘Woo-chan, who are you? !’ Hyo-bin is enveloped in a sense of betrayal and strange jealousy (?) that his childhood friend has been hiding the fact that he is gay. Meanwhile, Hyo-bin finds out that Ki-chan’s first love was him and makes an unexpected proposal to Ki-chan! Wasn’t it good